Makabawi Syndrome : when a trader experiences a loss that
impairs his or her psychological state in trading, causing the
trader to do more trades than usual that oftentimes result to
more losses. All for the sake of recovering the initial loss.

Like someone who just took the "NO FEAR" drink

Symptoms : reckless and emotional trading, disregarding risk
reward ratio. switching from one stock to another in a very short
time-frame. sometimes going 'all in' in a single trade.

To those who experience this.
Here's a tip to relieve some of the pain: 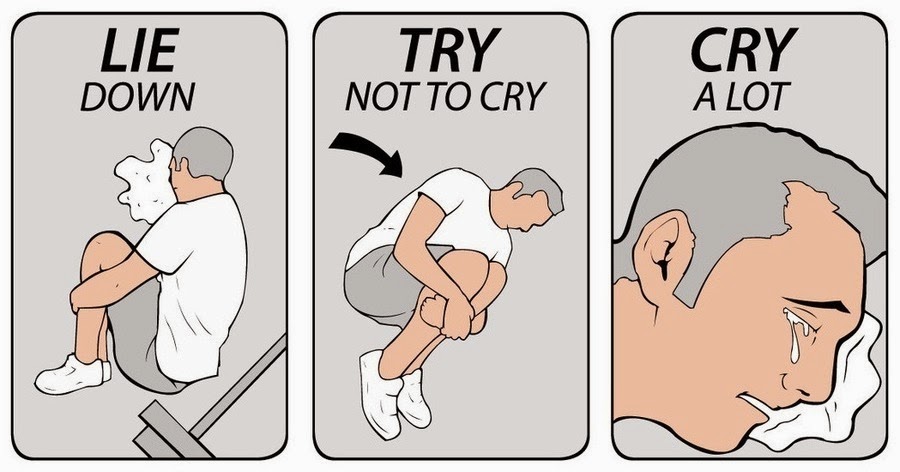 I went through this phase myself.

Who else is guilty?

I've been reading comments on how people perceive the recent
'resurfacing' of the paid services of different groups like FT and
BOH and others.

I think most people have been accustomed to 'Free' lessons and tips
that they fail to realize the higher purpose of things.

I'm not saying all, but most free tips and
modules out there are like this... 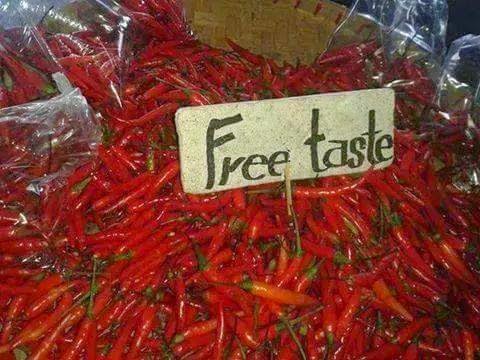 There's no such thing as "Free Lunch."

So treasure people like FT, Spyfrat, and BOH.
(Mga idol ko yan when I was just starting out.)
They give "Free Lunch" at the expense of their valuable TIME.
Money can be easily regained. Time you can't.

*Sidenote: I don't think many know that the information these guys
share to the public can mean at least 6-8 Digits worth to their big
clients.

If you're a noob in the markets and you find people disrespecting
market veterans then congratulations.

You just found a rare species of gurung ulols and wannabees.
(the followers just love to eat their rainbows) 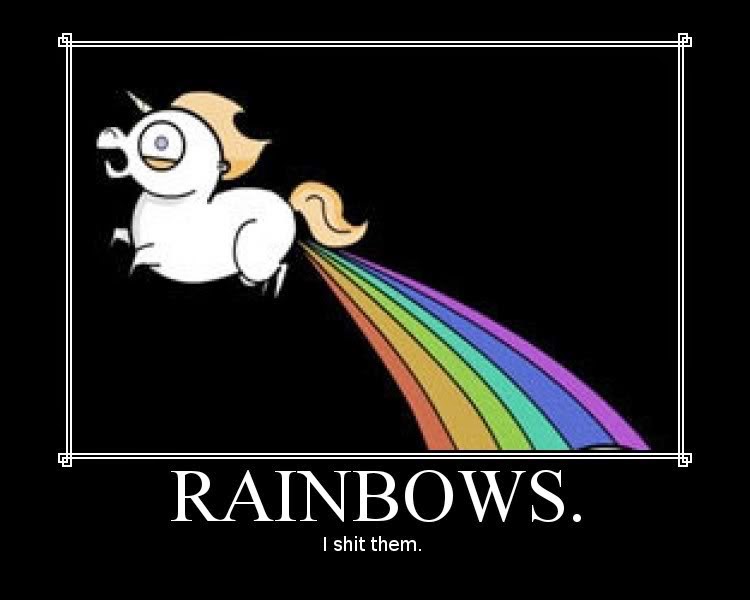 Tale of the TAP

Disclaimer : This is a work of fiction. Names, characters, businesses, places, events and incidents are either the products of the author’s imagination or used in a fictitious manner. Any resemblance to actual persons, living or dead, or actual events is purely coincidental.

It all started with a testimonial from one of the Batch 4 Applicants.

I was not able to save the comments. It was a good read.

It got deleted.
And our applicant, Danny,
got banned from the group.
(We already anticipated this)

A few hours later. This showed up. 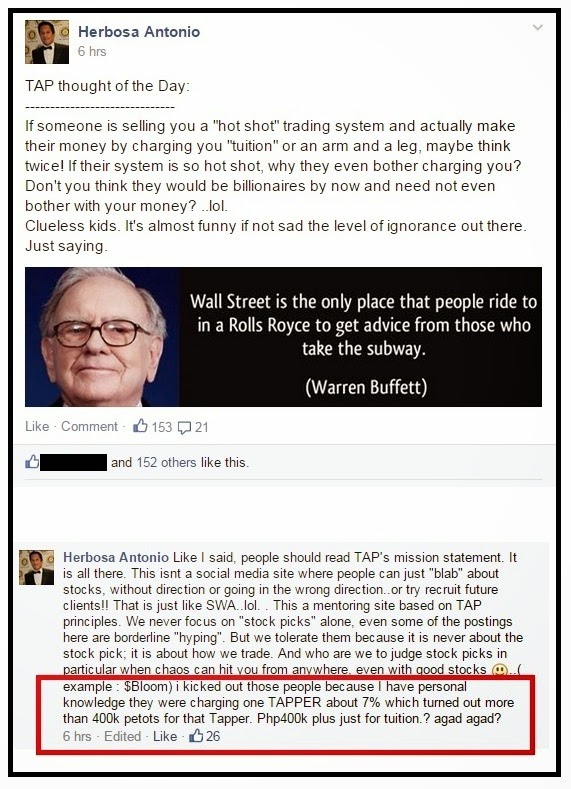 In view of all this, I felt the need to post my conversation with "the applicant".. I feel that I cannot just overlook the matter at hand as it might generate a distorted and distasteful image about the ZF brand. 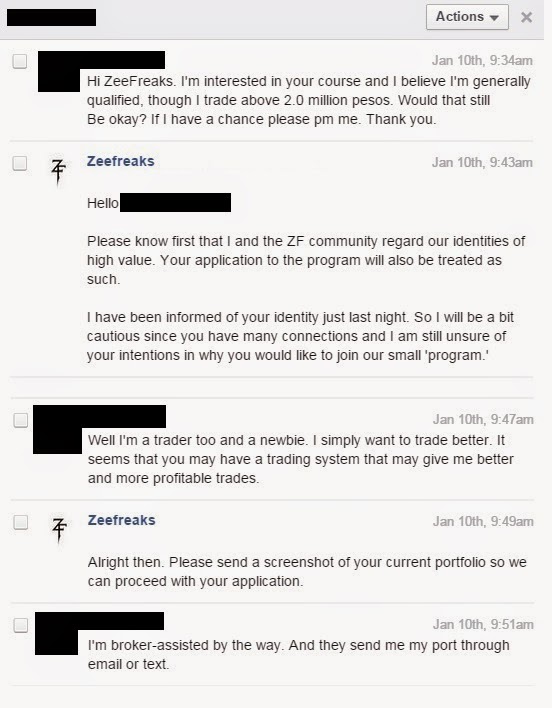 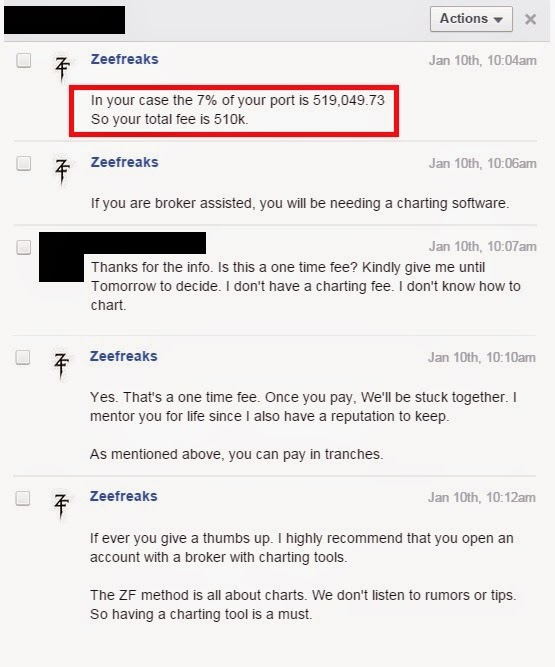 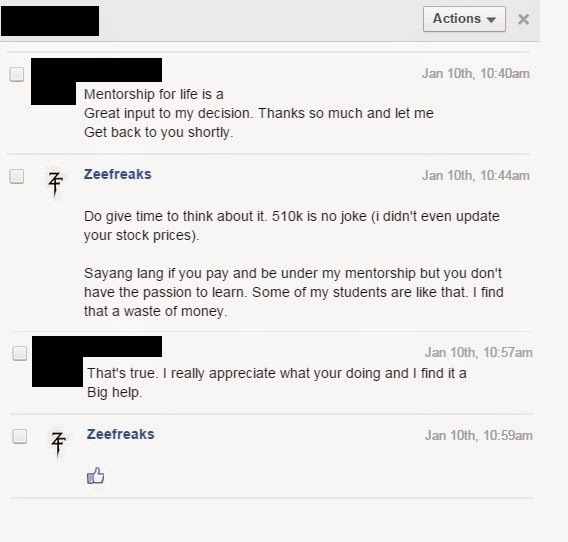 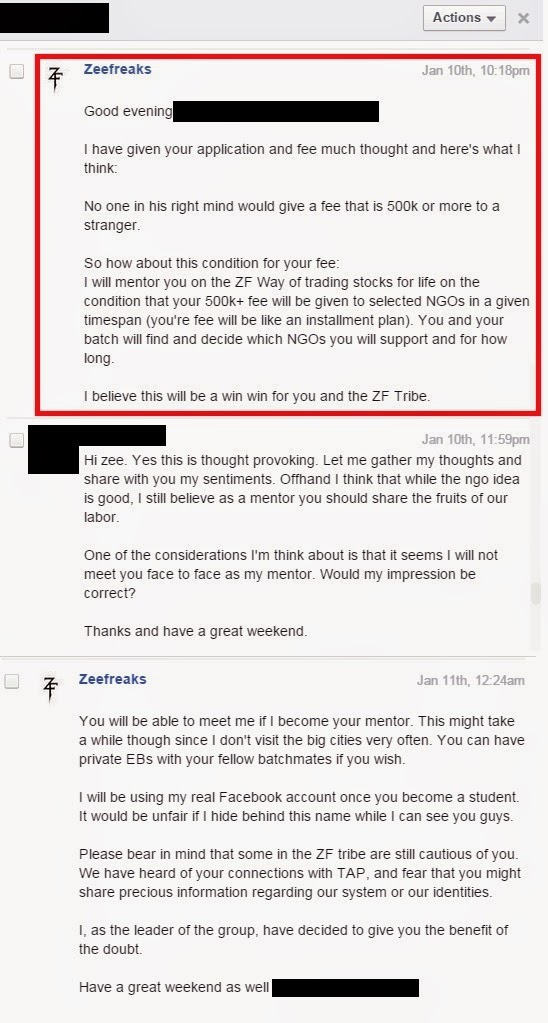 I have nothing against TAP.

But I have to say, there have been a lot of applicants for batch 4 who have voiced out their frustrations with the concerned group.

I can post them all here. But who am I for you to believe?

In case you were wondering how Danny is doing,
he did a lot of practice trades, good and bad,
and almost gave up mid-course. 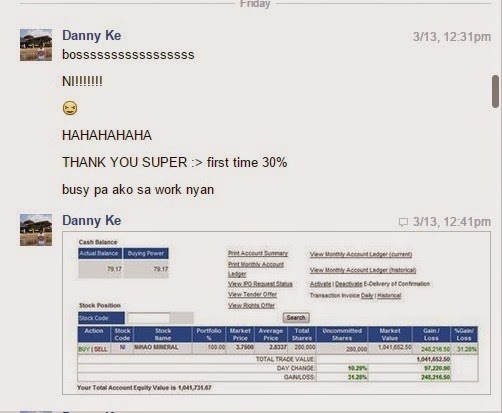 Because #realtrades are always better than "#realtalk."

If you have been a part of stock trading groups in Social media and
Forums, you have most probably encountered people who hide
behind aliases and fake accounts.

"Why do these accounts exist? Why go through such effort?" These
questions boggled my mind for a season. And later I realized why.

The top reason why people hide behind a name is Security.

I know of one person in Finance Manila who is quite famous and
well respected in his 'field'. So for a time, I tried asking around
about the guy and to my surprise, nobody knows his true identity.
We invited him to some private EBs but he never showed up.

"I like my identity to be kept anonymous." He simply explained.

Let's face it, if you have money or the ability and the public knows,
or even if you don't and you piss somebody off, you'll never know
when things can go bad. 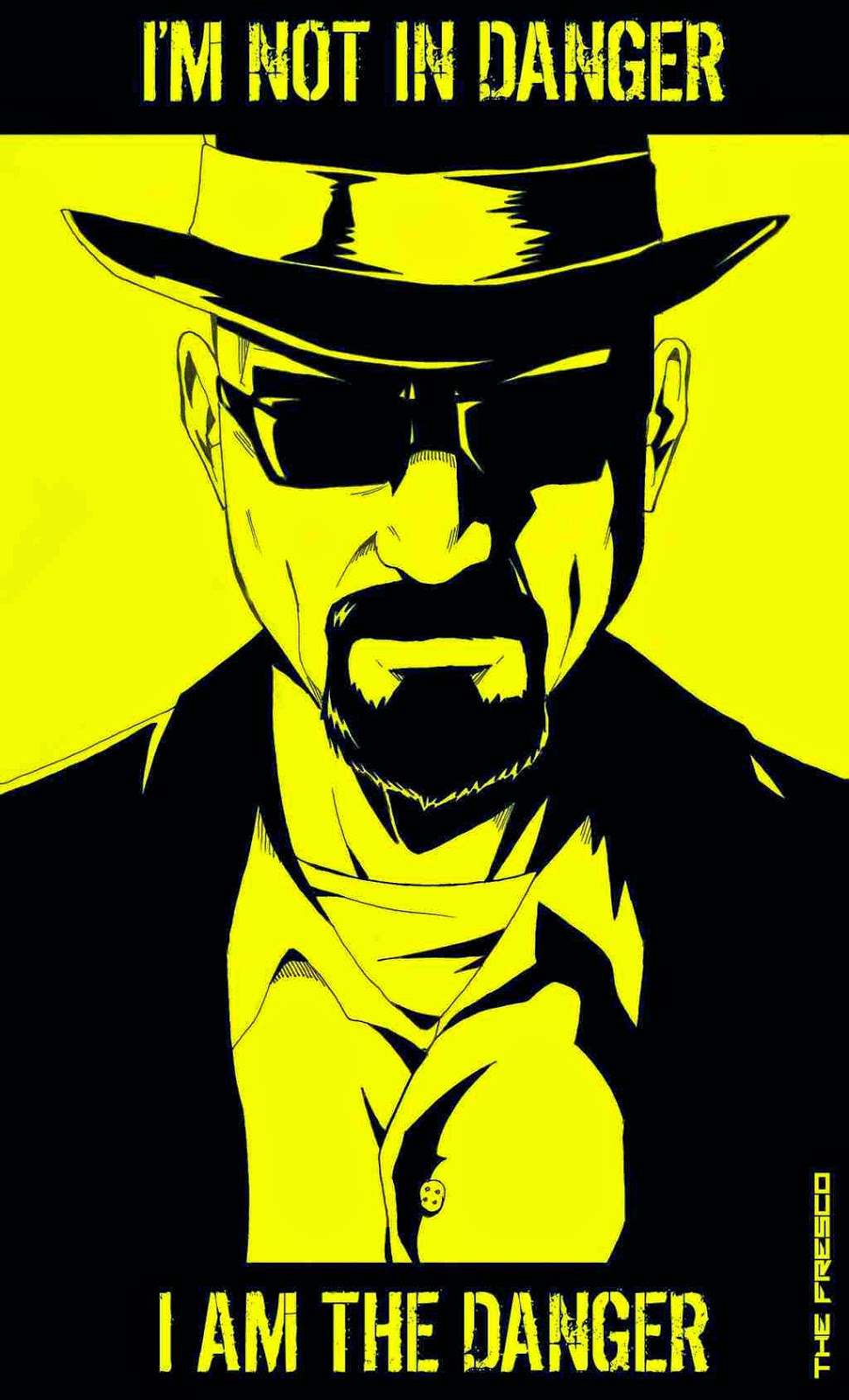 I guess it's always better being on the safe side of things.

Now, as someone who hides under a name, probably the best perk
is that feel of mystery. That dark shroud people just want to unveil
but can't.

I can't explain it well. But you know how it is when you get
attracted to that new transfer student. Even when there's a high
chance that person could be a psychotic stock maniac. 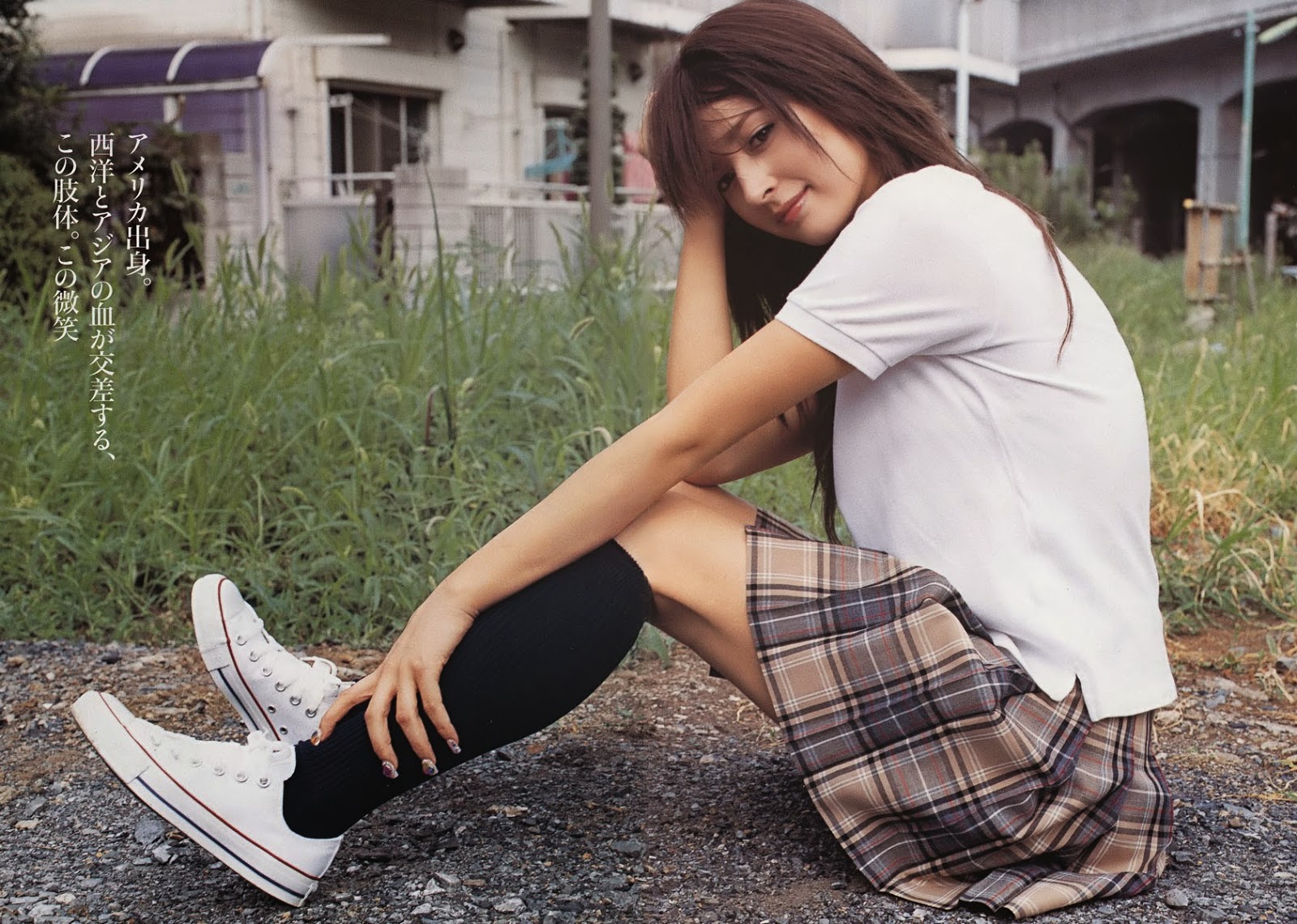 "Hi I'm Susan! Would you like to buy some tasty chocolate bARs?"

It's totally fine to be mesmerized.
Just make sure they don't feel and give off that networking scam aura. 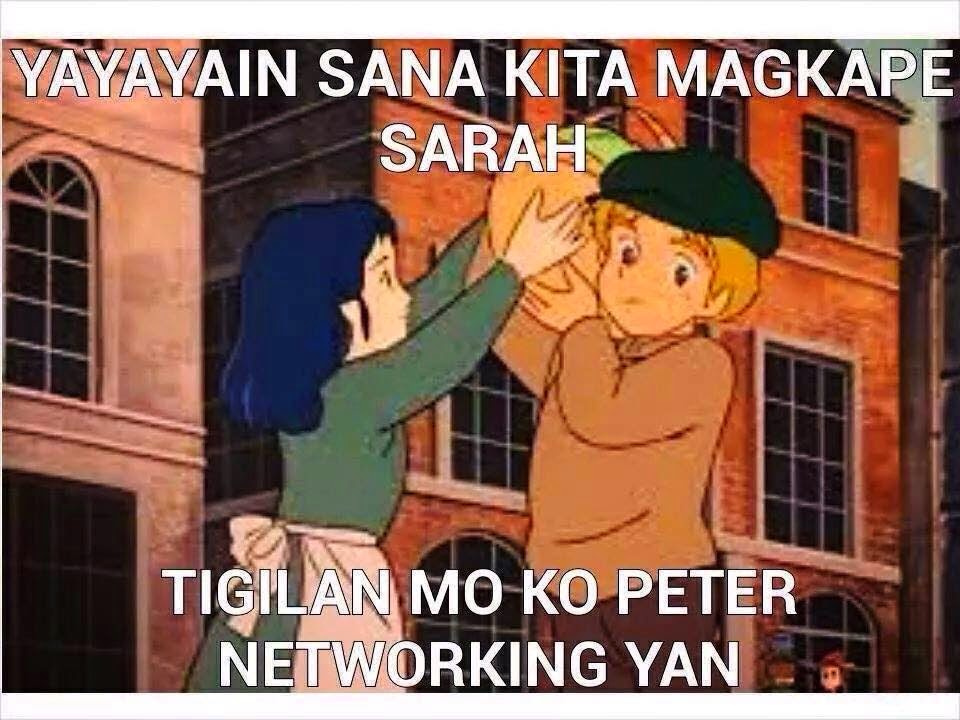 I'm not sure if that made sense to you but lets move on...

If you're still new to the world of stocks and groups, below are
the types of accounts you will most probably encounter.

That's you noob! Everybody starts as Citizens.

The Citizen's role is to fill up internet space with random
newbie questions and posts filled with emotion. In short, fillers.
Period.

These guys are a rare breed. I call them heroes because that's how
the citizens see them. The heroes feel obliged to answer the cries
of the desperate citizens. It's a fun relationship where one cannot
exist without the other.

Some heroes are free. Some are not.
What's important is you learn from them.

Just be careful you don't end up following hero wannabees
or what we love to call Gurung Ulols.

You'll see these guys everywhere. Be it hype or bash. They come to
purge anything that is not "in-line" with their thinking. Pretty
annoying. But that's just their way of life.

A group without balance, that deletes posts criticizing them or bans
people that are going against them is something you should watch
out for. If you find yourself in a group filled with these people, that
would be your sign to leave quietly.

Unlike the extremists, they claim to be insiders of their selected
stock. One should always question the Anointed One's intentions
for sharing their 'inside info.' Their name and reputation lives and
dies with their beloved stock.

These bunch have a lot of time in their hands. Some of you
probably hate these guys. I, on the other hand love them. Because
when they post, senseless or not, they gauge your maturity as a
trader, as a person and as a fellow troll.

I know some trolls who are seriously rich. Makes you wonder why they do what they do.
If you find yourself in a heated discussion with a troll, calm yourself and stop.
That's the only way you'll win against them. 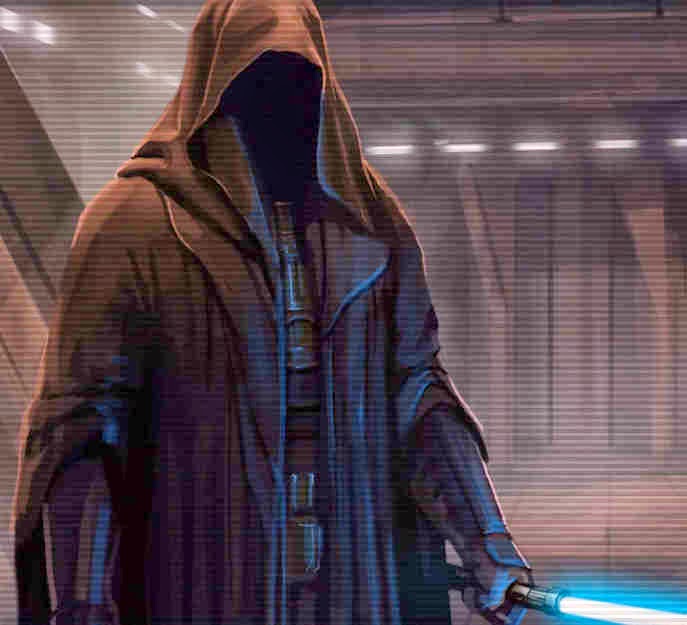 An interesting group. When a Jedi speaks, you be careful not to fall
into their mind tricks. They usually talk in riddles and just love to
post stuff that would make your brain muscles cringe.

Here are a few Jedi Posts
(with permission)

I have to say that breaking a Jedi's puzzle is utterly satisfying.
It kind of gives you this feeling that you're smart. Unless of course
it was all part of the mind trick. Then you're screwed.

There was this one time during one of the many stock EBs
when a person approached me and said... 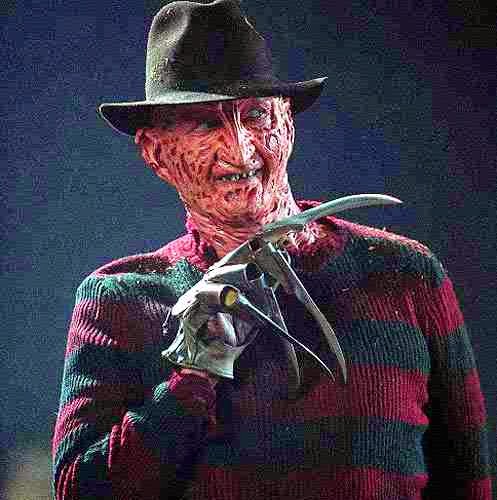 In my mind I was like "Ya don't say!?" Freddy was one of the
lurkers in a certain stock chatroom. He registered so he could see
what was going on and maybe get some hot stock tips and picks.
Freddy never did make a single post.

Out of all the names. He just had to register the name
of one of my childhood fears.


If my observation serves me right, the one thing that divides
the people who hide behind these aliases is


There are those who carefully build a name, that when posting,
think of how it will affect the way people see them. And there are
those who just don't give a damn or think they can just hide behind
a new name when things go bad.


Did I miss anything?

The Trading Port - The 2nd of the three ZF ports and the most actively traded of the three. Every 3/6 months all profits are withdrawn and the port gets reset to 2.0 M. If within the 6 months no profits have been made, no additional funds will be added into the trading port.

Port Snapshots will be added but shaded until the end of April which would be the next port reset event.

(Post updates 1.26.2015)
Deleted all previous port snapshots so no one will attempt to do 'computations' and get which stocks I left.

Sold most of these babies.

Post Update April 1, 2015
This will be the Last series of
Port Snapshots for this season.


Please be reminded that these snapshots are a work of fiction
and by no means should you believe them. 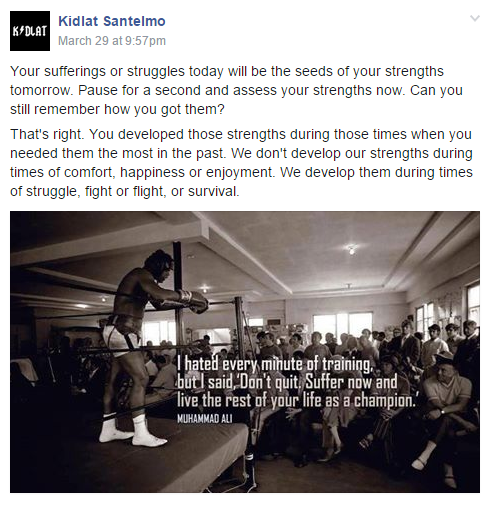